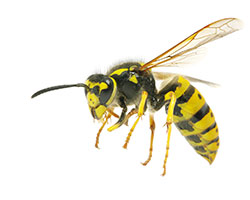 The sting of a wasp can cause very-serious allergic reactions. If you or a family member has been stung by a wasp, immediate medical attention should be sought.

There are numerous species of wasps. In fact, there are more than 30,000! They are mainly differentiated by their rainbow-array of colors. Colors include: gorgeous shimmering blues and greens, black, yellow, red and more. Their sizes vary, as well, and they can be virtually microscopic or up to 1.5 inches in length.

A wasp infestation should be reckoned with very carefully. Stings from these sometimes-aggressive creatures can prove to be incredibly painful.

Symptoms can cover the gamut from redness, itching and swelling, to systemic reactions that can debilitate a person with breathing difficulties, a drop in blood pressure, inflammation of the brain and other serious side-effects. Bees can sting only once; but a single wasp can sting multiple times.

A Few More Facts About Wasps

Most wasps will live completely solitary lives where each adult female lives and breeds independently. Some solitary species will lay eggs on, or in, a host animal or insect.

Then there are some wasps, such as cuckoo wasps, which strategically 'sneak in' to lay eggs in the ground nests of other wasps, bees or other insects. They know how to slip their eggs into an underground burrow without being discovered – timing is everything. If successful, the developing cuckoo wasp larvae will eat the host's larvae.

Social wasps, however, live in organized societies where a very structured hierarchy within the colony always exists. Social wasps account for roughly 1,000 of the 30,000 known species. When socialized wasps become colonized, they can number in the thousands. All solitary and social wasps lays eggs by the queen, but the loner variety will abandon her laid eggs which will hatch without her care. Socialized wasps, however, will carefully tend to their eggs inside the nest.

The Queen Starts it All

Each and every spring, fertilized queen wasps, who hibernate throughout the winter, will emerge. It's a glorious time for the queen who has the innate knowledge to build a small nest and raise a first-generation of worker females.

This 'starter brood' of worker females has the daunting task of expanding the nest's size by constructing numerous 6-sided cells that will, ideally, accommodate the eggs that are continually laid by the queen.

A small nest that began with just one fertilized queen can easily grow into a colony with more than 5,000 critters. Once summer is over, all the workers and the original queen will die, only to be replaced by newly-fertilized queens who will find a hibernation spot for the winter and start the entire process all over, again.

Predatory wasps are just that – predators. And, like a wolf or lion, they will kill and eat their prey which can include other insects or insect larvae, spiders, katydids, and other animals. Prey, used as food, is fed to the developing larvae, within the nest.

Parasitic wasps, on the other hand, do not attack and kill but they perform a less-aggressive approach and simply lay their eggs in a host such as a caterpillar. The eggs transform into developing larvae which eat the hosts' still-alive bodies. Some social wasps are omnivores and thrive on fallen fruit, nectar and dead or dying insects.

Paper wasps will use their powerful mandibles to scrape wood fibers from any viable source: old logs, wooden fences, barns, wooden rafters, etc. When the fibers are chewed, the wasps' saliva creates a chemical reaction and a pulpy substance is created to construct the papery nests we are familiar with.

Benefits to the Eco-system

In-spite of their sometimes ferocious tempers and well-earned reputation for pain, wasps serve humans in ways that are under recognized. Wasps could be considered 'unsung heroes' of the insect world since virtually every destructive pest that roams the earth is a wasp's prey.

Fascinatingly, the agriculture industry is taking full advantage of these expert killers to help protect crops – a distinctively advantageous alternative to using an over-abundance of chemical pesticides. Also, wasps are an organic form of pest control in flower and vegetable gardens.

Call in the Professionals

At Brothers Bee Removal, we are experts at correctly identifying the type of stinging pest involved and choosing the most-effective treatment regime. Once the appropriate treatment plan has been utilized, we will schedule proactive follow-up appointments to ensure maximized success and long-term results. We will, also, discuss preventative measures to minimize any repeat invasions.

The solution to your wasp problem is only a phone call away! Our experts will be happy to answer your questions right over the phone; and we'll, also, be happy to schedule an appointment, at your convenience.