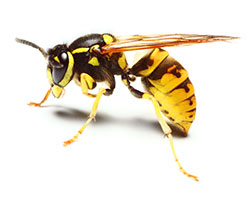 Yellow jackets are a type of wasp. The venom from a yellow jacket can cause intense pain and, possibly, fatal allergic reactions. If you or a family member has been stung by a yellow jacket, seek medical intervention as soon as possible.

Yellow jackets can be unduly aggressive if hungry. This is especially true where meat is grilled at a picnic or backyard BBQ.

These intruders can display zero respect for your personal space. Their intrusive personality type will attempt to share your meal, soft-drink or anything sweet if their natural food source is limited. Perfumes will also attract yellow jackets. In addition, people who wear brightly colored clothing, especially prints with flowers can attract them as well!

The name 'yellow jacket' is an appropriate one to describe this type of stinging insect since their bodies typically display yellow and black bands. A white and black variety exists as well.

These flying wonders are usually a half-inch to one-inch long. Because yellow jackets are not overly large, they can be easily mistaken for bees. But, their physical features are unlike bees in that they do not possess the same amount of hair as bees, nor do they have a rounded abdomen associated with bee species.

There are some other facts that pertain to yellow jackets that just might surprise you, such as:

There are innumerable pests that would reek havoc on mankind and his crops if they were allowed to multiply, unabated: flies, caterpillars, locusts and moths, for example, would run a-muck without intervention from yellow jackets who dine on these juicy morsels. Yellow jackets also feed their young on these insects. Additionally, yellow jackets are beneficial pollinators.

Yellow Jackets Nest on the Ground

Typically, yellow jackets construct their nests below the ground, though they can build them in low-lying areas above ground including branches, bushes or trees.
At times, nests will be found attached to buildings, under porches or steps or even in the cracks of sidewalks.

Yellow Jackets have a Distinct Hierarchy

Yellow jackets are sociable and live in colonies that include:

But the colonies exist for only one year. The queen yellow jacket has the coveted distinction of living throughout the winter, via hibernation, while all the males and workers die off every winter.

Fertilized queens are protected from the ravages of winter by burrowing in hollow logs, stumps, under bark, in mulch and in buildings.

When warmer weather sets in, the queen emerges to build a small paper nest. It is here where the queen will lay her eggs. Once the eggs hatch, the attentive queen feeds her brood for about 20 days. The young will emerge from the nest as completely infertile, female workers.

Yellow Jackets Have No Fear

By late summer, a yellow jacket colony can include thousands of members. They will show no fear in protecting their nests. Easily provoked if they feel threatened, these winged warriors will attack in groups and will think nothing of chasing any intruder for long distances. Revenge is their driving force.

Even the sound and vibrations of a mower would be enough of an excuse to attack if it is perceived as a threat to the colony.

Call in the Pros

Our team-members are seasoned professionals who will identify the kind of invader you have and determine the best form of control. Once the appropriate treatment plan has been utilized, we will schedule proactive follow-up appointments to ensure maximized success and long-term results. We will also discuss preventative measures to minimize any repeat invasions.

The solution to your yellow jacket infestation is only a phone call away! Our experts will be happy to answer your questions right over the phone. We'll also be happy to schedule an appointment, at your convenience.