The sting of a hornet can cause extremely-serious allergic reactions. If you or a family member has been stung by a hornet, medical attention should be sought, right away. 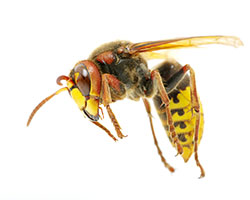 Around 20 species of hornets exist in the world. Vespa crabro is the scientific name for the European hornet which is the one type of true hornet found in the US.

These tenacious workers can grow up to 1.5 inches in length, with the queen hornet taking full credit for being the largest member of any given colony.

If hornets feel their nest is being threatened, their aggression to ward off any intruders will not go unnoticed; and getting stung should be expected.

To identify a European hornet, look for abdomens that are reddish-brown followed by dark yellow with brown-hued bands and tiny spots.

There is a type of hornet that is not categorized as a true hornet, known as the baldfaced hornet. They have striking, ivory-white markings on their faces and bodies. They are known as 'aerial yellow-jackets' since this species is technically a yellow-jacket.

European hornets will make their residence in:

Tree branches and heavy brush can be home for bald-faced hornets. It is the fertilized queen who produces the football-shaped, gray, paper-like nests most of us have seen from time to time. That paper-like material is composed of the queen's saliva mixed with wood fibers that are extracted from fences, barns, logs, etc. Cellulose from weathered or rotting wood is the key ingredient that creates the construction paste, once the saliva is added.

Once cold weather sets in, hornet nests are abandoned. Young fertilized queens will find protected areas to hibernate. When winter is over, fertilized queen hornets are in nest-building mode and will create many brood cells within the nest, intricately designed as egg hatcheries.

When the first set of larvae hatch, the queen will dutifully feed them insects. This initial brood, once grown, will become workers and take on a variety of chores to benefit the nest, such as offering protection, feeding the young and collecting food.

The colony will continually expand to the point where up to 400 hornets can co-exist in a single colony. It is the overwintering queens that become the sole survivors of the long, harsh winter. They will be ready to create a completely new nest in a new location, the following year.

Since hornets have a reputation for inflicting severely painful stings, they can be despised without being given credit for playing a vital role in our environment. They eat other insects which, if left unchecked, would over-populate and become problematic. Insects such as disease-carrying flies as well as destructive large moths. Also, hornets help to pollinate flowers as they search for nectar.

Effectively getting rid of a hornet colony is quite involved, and due diligence must be observed. Everything from special clothing, goggles, rubber gloves and a complete face-mask is highly advised due to potential stings as well as any chemicals that might be used.

The easiest and safest approach is to use a professional, such as Brothers Bee Removal, who is extremely well-versed in removing hornets.

Simply spraying a pesticide onto the outside of a nest will be entirely ineffective. Even if one is standing away from the nest while the spray is being applied, the hornets will only become agitated and aggressive. Getting stung is highly likely, and the pain from a hornet's stinger may persist for several days along with localized redness and swelling and/or swelling on other parts of the body.

It is always very important to seek medical attention if a sting occurs to ensure prompt medical intervention in case of a potentially-serious allergic reaction. In some cases, systemic reactions can affect one's entire body and adversely compromise breathing, pulse, swallowing, one's ability to stand, blood pressure and more.

Call in the Experts

At Brothers Bee Removal, our team-members are experienced and trained professionals who can easily identify the kind of invader and determine the best form of action.

Once the appropriate treatment plan has been determined and utilized, we will schedule proactive follow-up appointments to ensure maximized success and long-term results. We will, also, discuss preventative measures to minimize any repeat invasions.

The solution to your hornet infestation is only a phone call away! Our experts will be happy to answer your questions right over the phone; and we'll, also, be happy to schedule an appointment, at your convenience.